4 was born in 2006, but we did not know it at the time. We had a vision of telling a story about our country by following a sort of sideroad. And we wanted to do so by experimenting with the creative possibilities offered by an homogeneous collective writing, where the photographic practice is a participatory process of four photographers, but the end result is perceived as unique. In summary, we knew where to start from, but not what we would have reached. Several years later, that same stylistic experiment would become the original expressive trait of the collective. From the hundreds of contact sheets, an archive of testimonies and human geographies would emerge, together with our vision of Italy. And we realized that it all could be grouped in the four classical elements. In “Land” we revisits the long term scars left by some of the main earthquakes of the last 40 years. With “Water” we documented the alarming anthropization of the 7000 kilometers of the Italian coast. in “Fire” we explored the four active volcanoes present in our country, and “Air” chronicles the most polluted industrial towns of Italy.

Getting close to our territory revealed an intricate pattern. Our quest for an original way to decipher this complex reality lead us to collaborate with Wu Ming, a very active collective of four writers. 4 became an uber­collective project. WuMing2, one of their members, wrote four pataphysical stories.

The choice of a writer was dictated also by the desire of transforming 4 into a self-published book. Done in collaboration with Renata Ferri (curator) and Ramon Pez (art director), it encompasses four volumes, one for each element, containing the text and a selection of images. The book, in Italian language, has been produced in 1000 copies after a successful crowdfunding campaign on the platform Produzioni dal Basso.

Cremona, Trieste, Taranto and Gela ­ these are among the most polluted urban centers in Italy, due to the presence of near­by industrial plants. 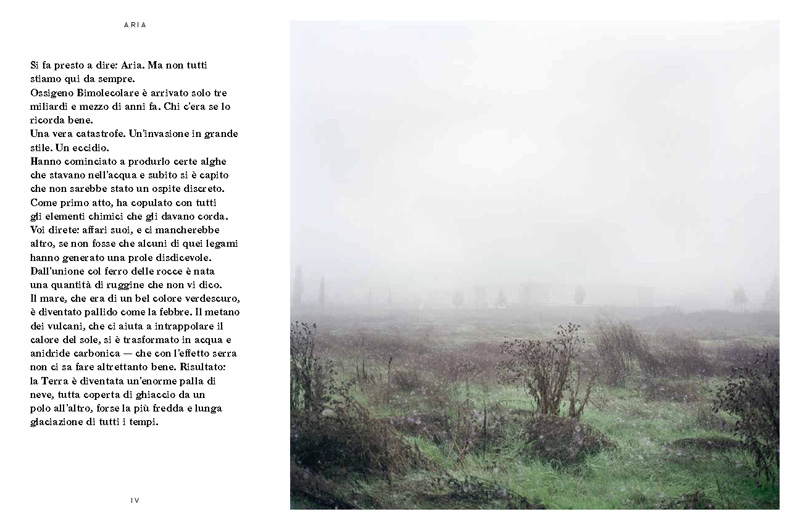 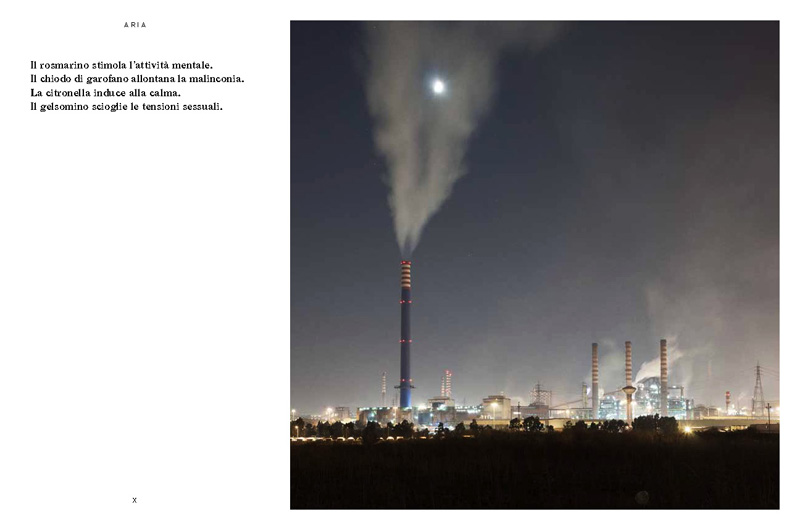 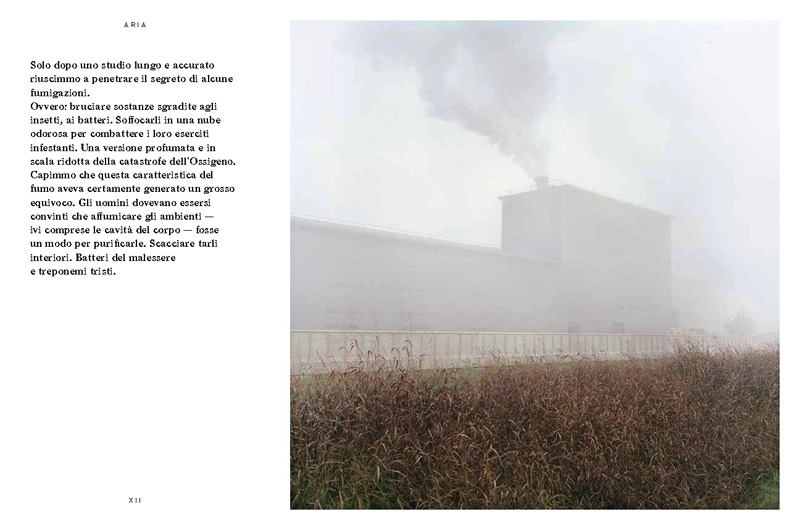 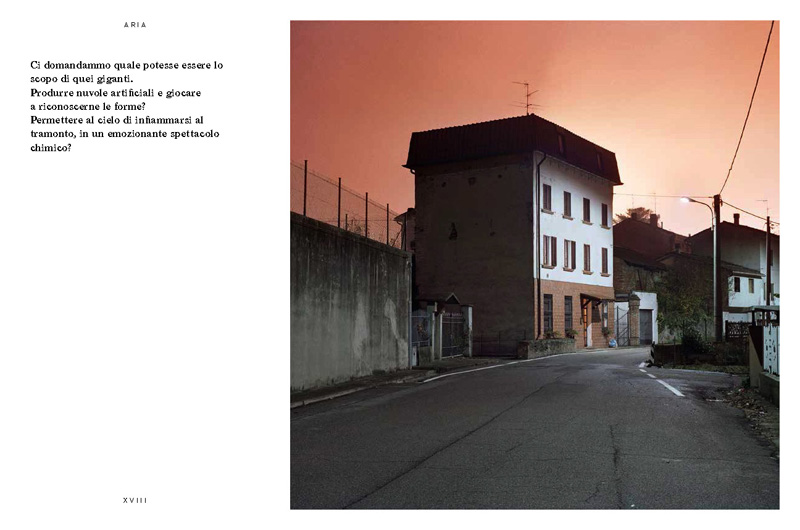 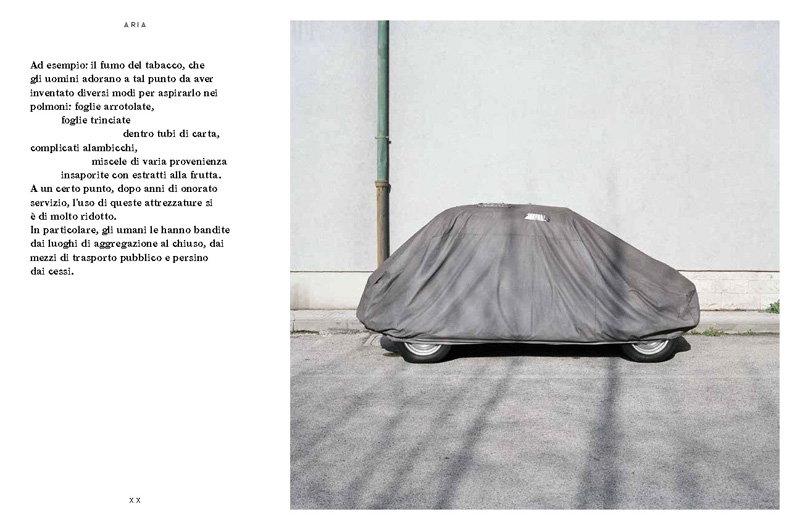 Humans have transformed a large part of the 7000 km of the Italian coastline. We travelled along most of these to witness the destructiveness of our actions. 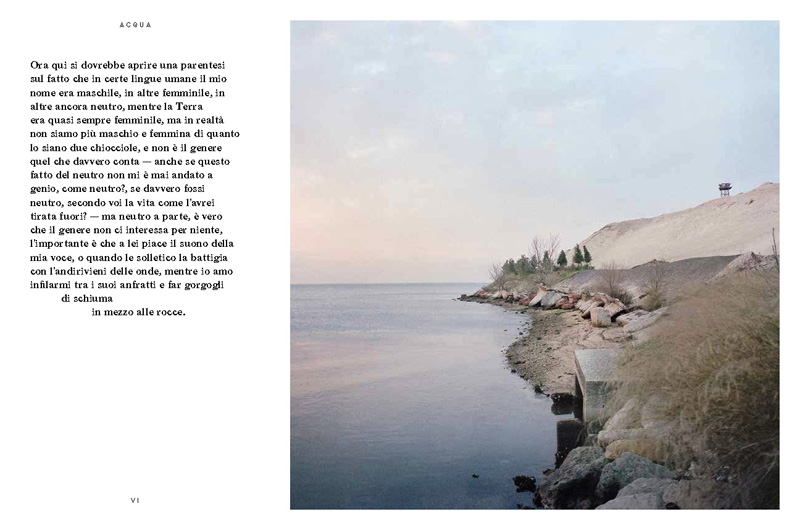 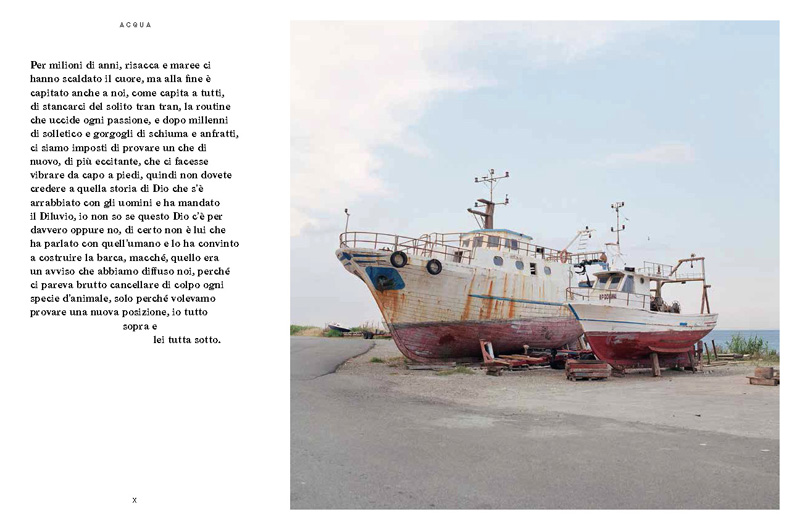 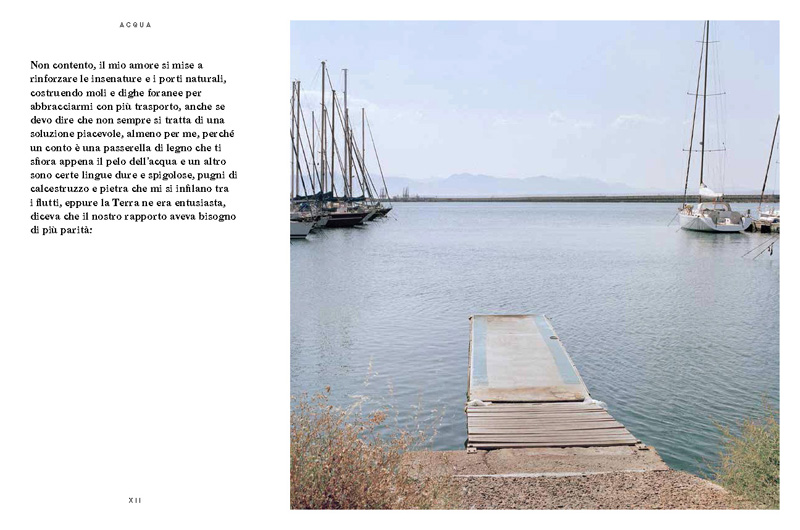 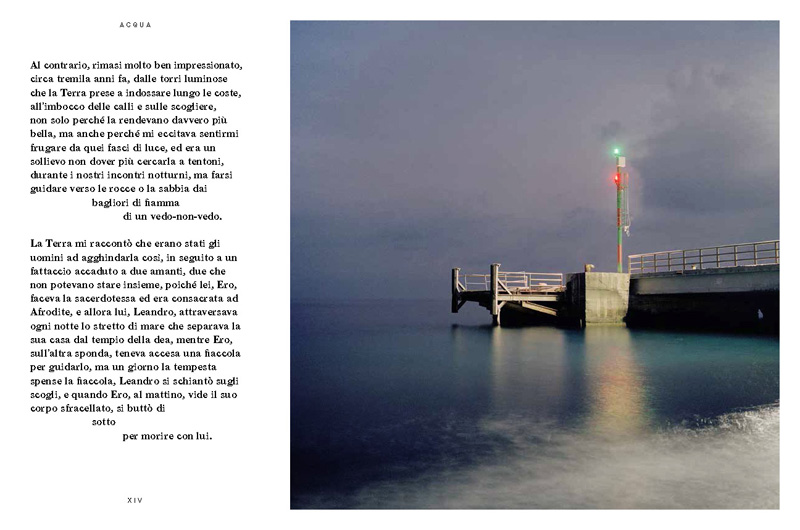 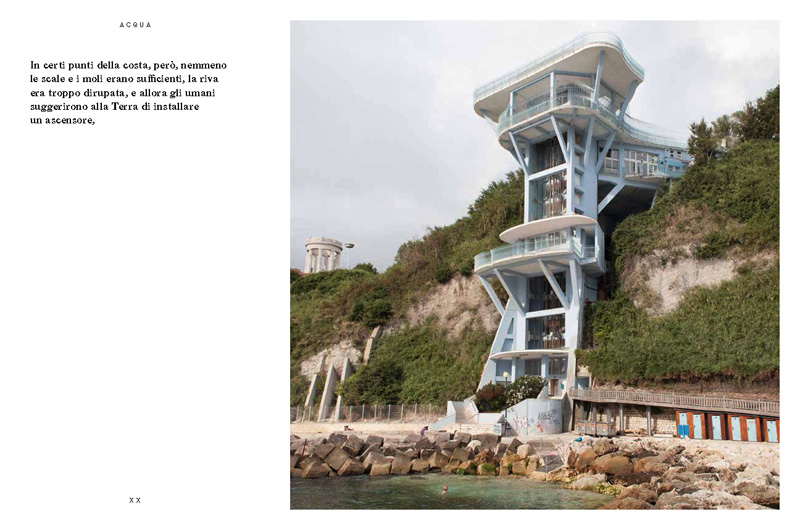 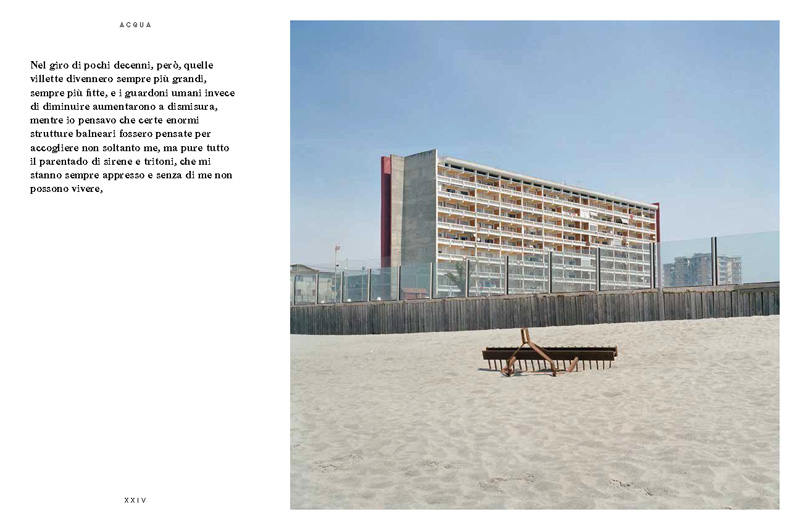 From Sicily to Friuli, from 1968 to 2009, we revisited areas devastated by some of the most violent recent earthquakes. 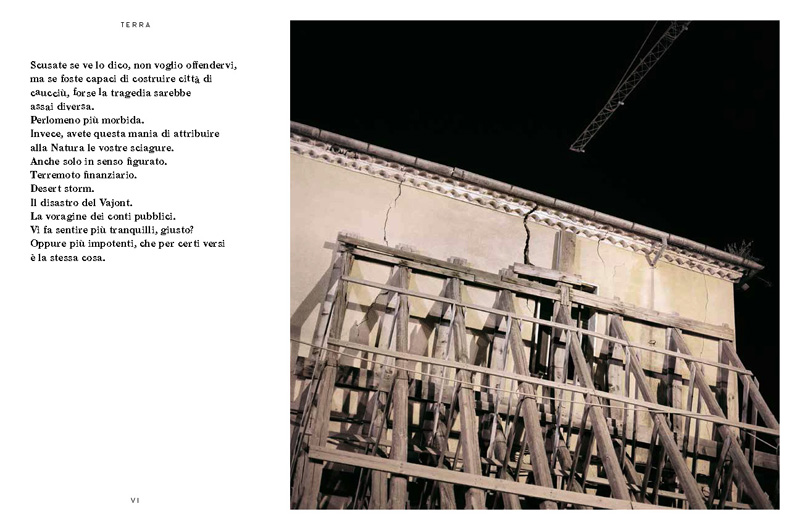 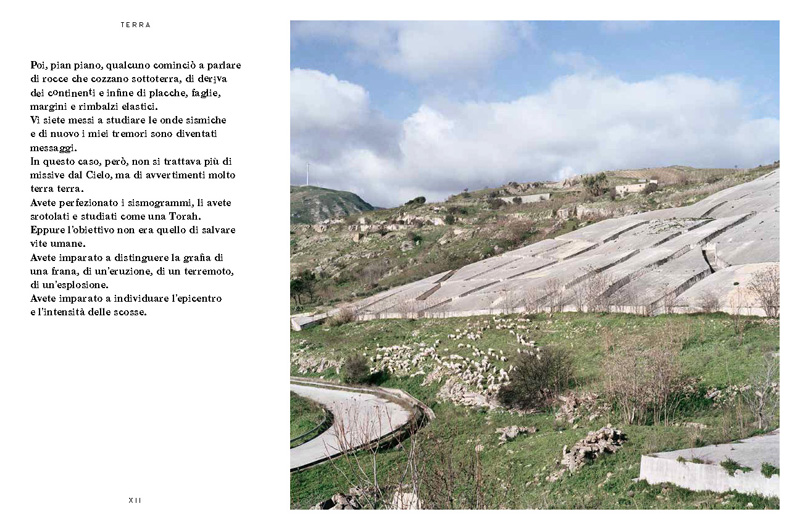 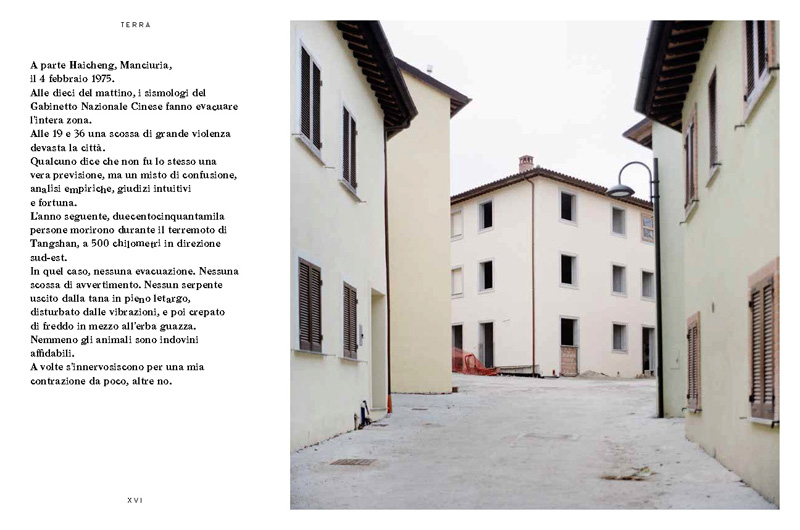 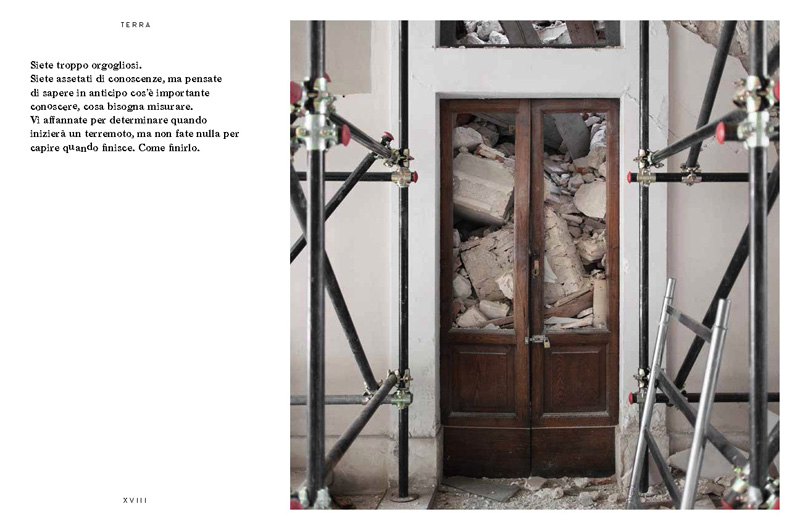 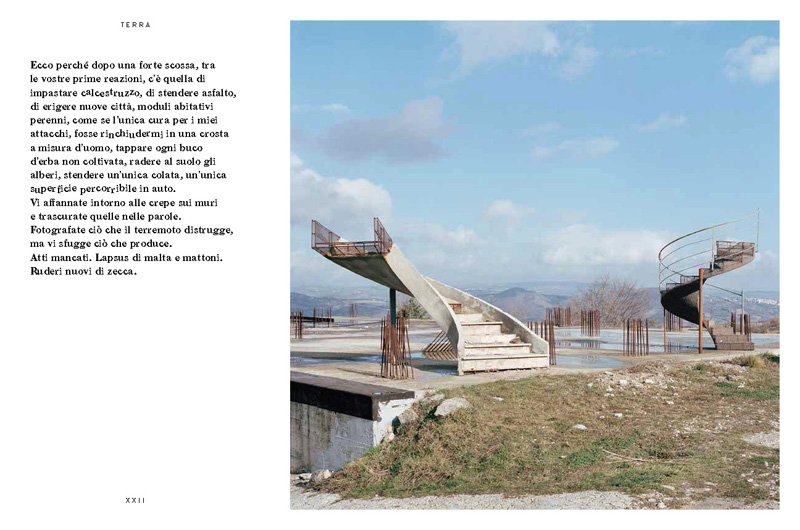 We travelled to Stromboli, Vesuvius, Etna and Vulcano to document the delicate relationship between humans and volcanoes 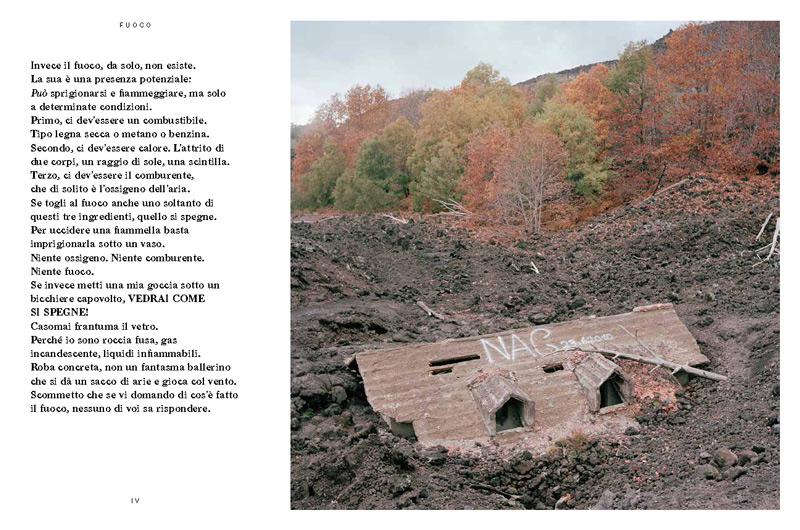 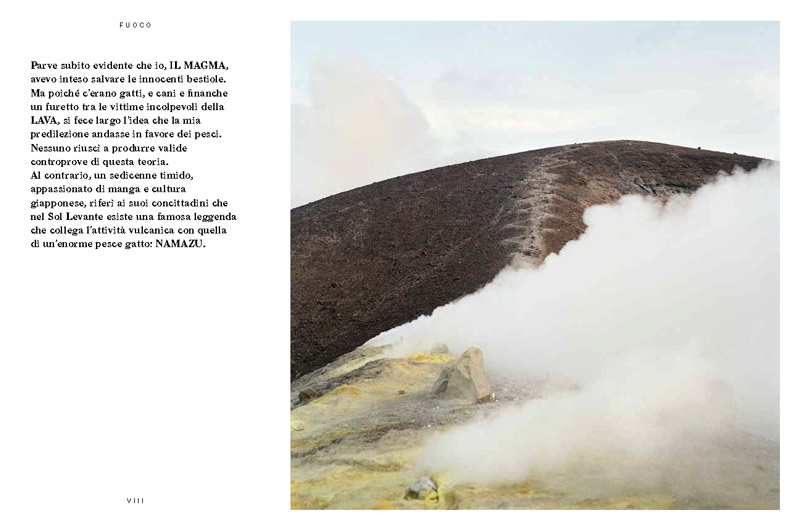 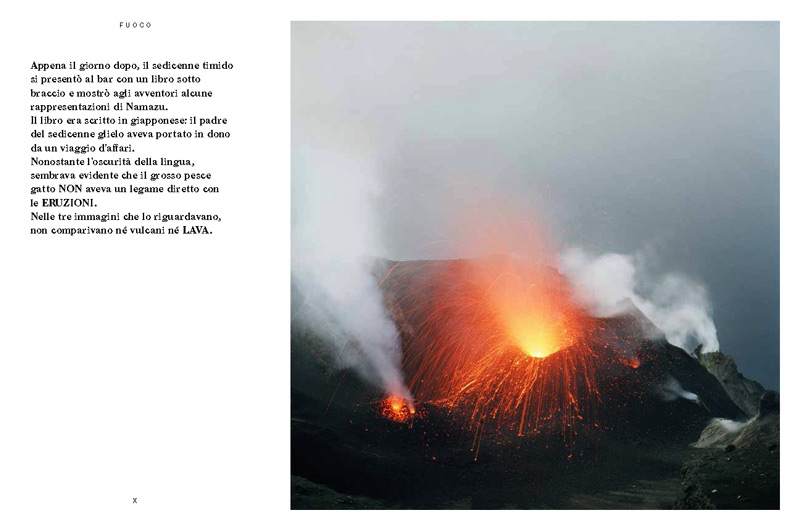 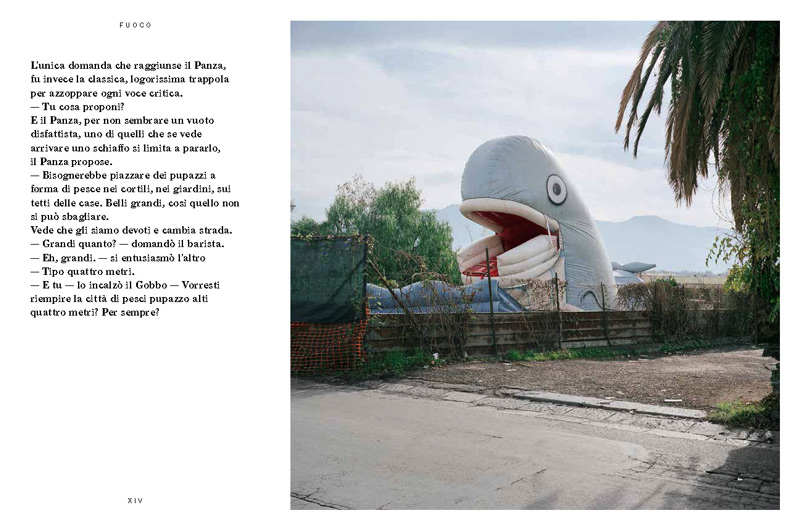 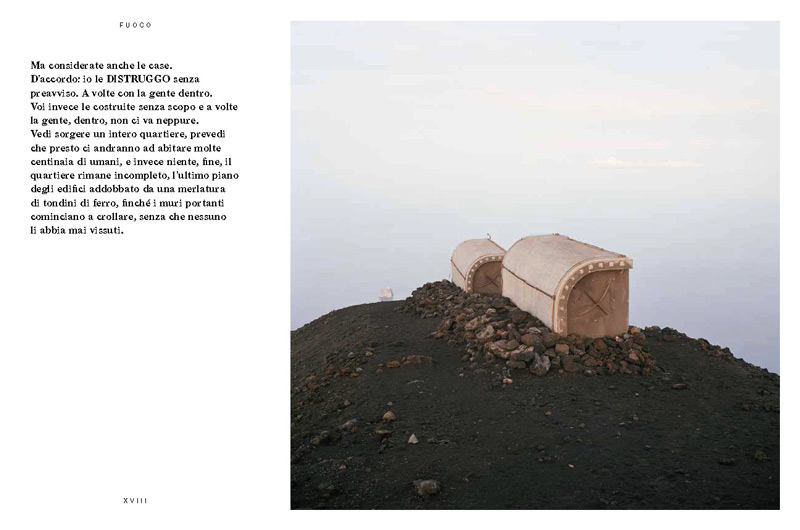 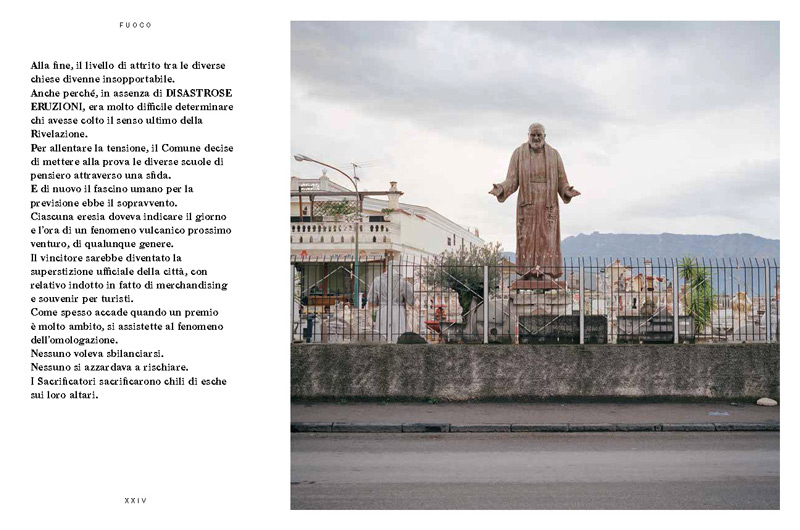 The work has also become an exhibition, curated by Daria Filardo, with 40 fine­ art prints measured 50x50 cm mounted on hand­ made frames. The viewer can listen to WuMing2’s stories read by himself, with the provided mp3 readers. The exhibition has travelled to Florence, Vicenza, Macerata and Rome often accompanied by musical readings and presentations. 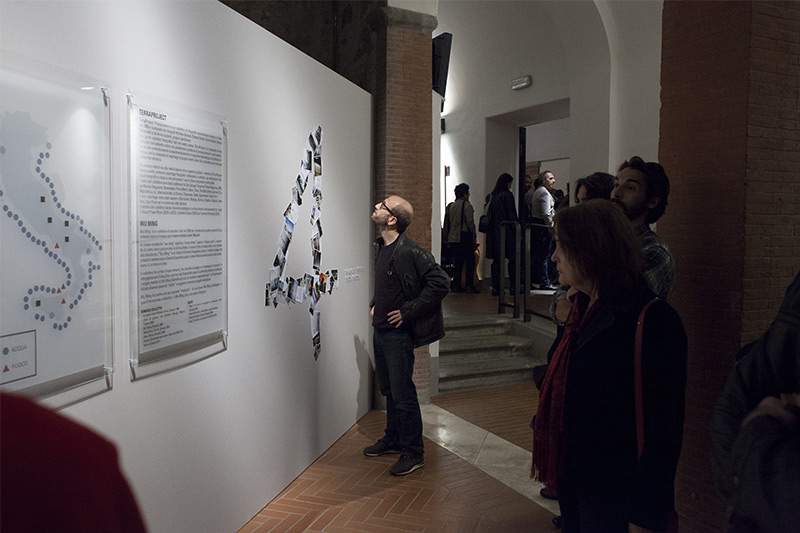 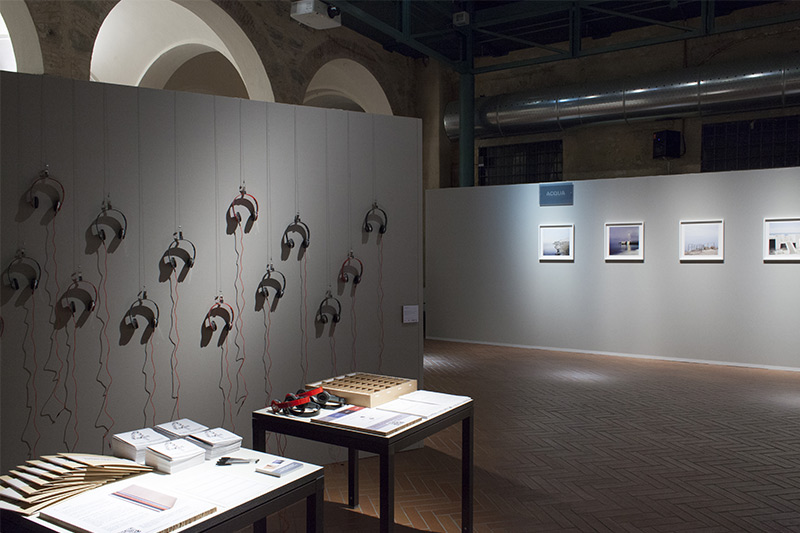 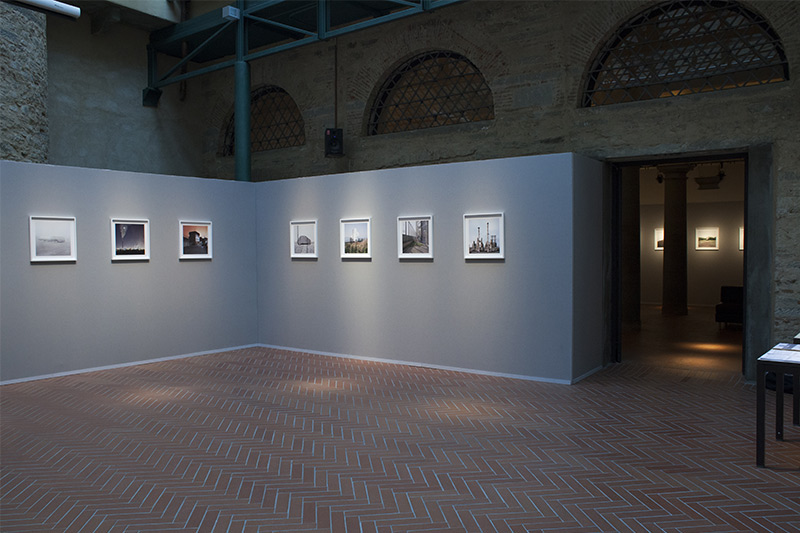 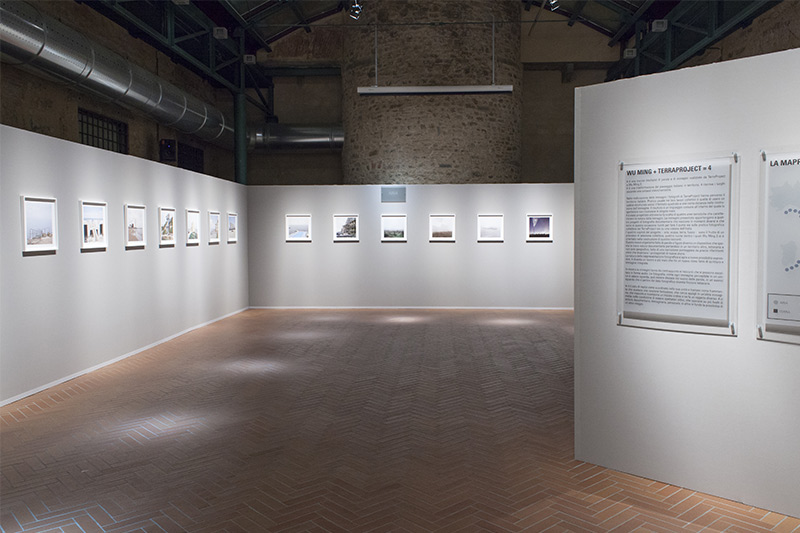 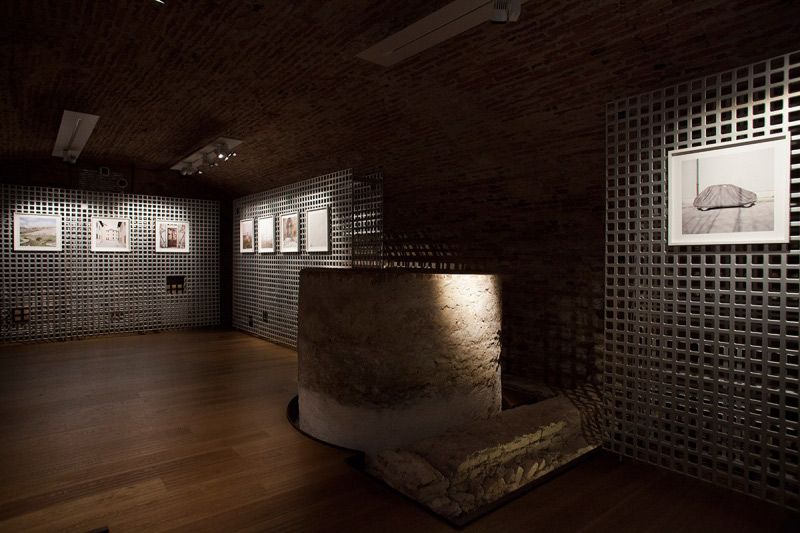 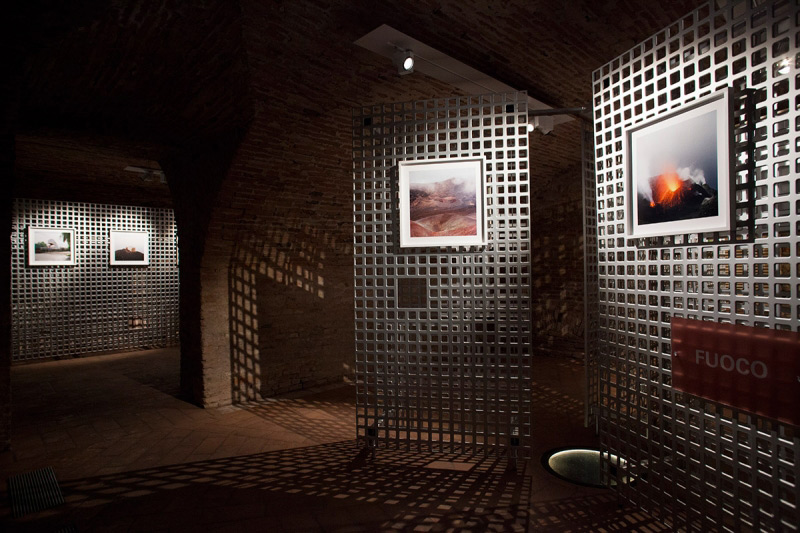 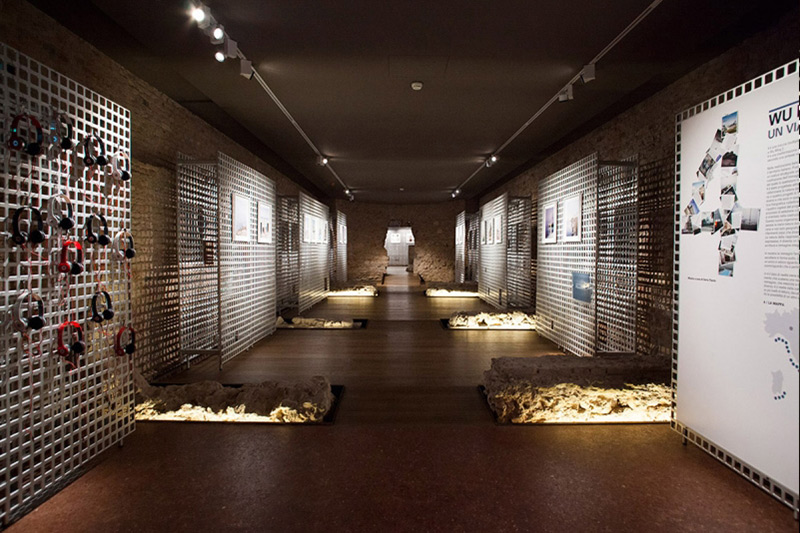